The best Nikah Khawans For Nikah Service for Islamic marriage with Urdu and English Nikah Nama in Karachi, Islamabad, Rawalpindi and Lahore is available at Right Law Associates (Pvt) Ltd. Our one-day service of registering Nikah Nama is also available.

On request, we can arrange for a Nikah Khawan to accompany you if you need to perform Nikah in another neighboring area. If you take him to some other area/town/village, you have to bear his fee for the entire day.

Online or offline Nikah by the Nikah Khawan of Right Law Associates in Karachi, Islamabad, and Rawalpindi

We provide our services not only in Karachi, Lahore, Islamabad, and Rawalpindi but also in their surrounding suburbs. By simply contacting us and booking a qualified Nikah Khawan, you can have your Nikah performed for as little as Rs.10,000-15,000.

For the prompt registration of Nikah, we also have Nikah Registrars in Karachi, Islamabad, and Rawalpindi in addition to our Nikah Khawans.

We have provided Nikah services online for Karachi, Islamabad, and Rawalpindi since 2012, and our Nikah Khawans (Qazis) are always ready to assist with your Nikah ceremonies at your home, in your wedding hall, or at your banquet.

In different parts of each city, there are Nikah Registrars who are responsible for registering Nikahs. Right Law Associates facilitates Nikah Khawan in Islamabad and Rawalpindi, as well as the registration of Nikahnama (Official Document of Nikah).

We coordinate the Nikah with simplicity. Simply set up a time for the Nikah in our office, and then have the bride and groom show up at that time. During the Nikah ceremony, our Nikah Khawan (Qazi) performs the Ijab-o-Qabool, Khutba-e-Nikah, signing and obtaining thumb impressions of the bride, groom, attorneys, and witnesses within 30 minutes.

The Right Law Associates venue provides ample opportunities to distribute sweets, take pictures, and record videos during or after the Nikah Ceremony.

In Pakistan, Who Are Nikah Khawans (Qazi) for Online or Offline Nikah?

Almost every Nikah Khawan (Qazi) on the panel qualifies an Islami Madrassa and is certified. The religious functions have been taking place in Karachi, Islamabad, and Rawalpindi, Pakistan, for several years now. The Nikah Khawans (Qazis) in our mosques are generally imams.

In Islamic law, or as a whole, the marriage contract is called nikah, which is by reciting the  Holy Qur’an. In the Wehr-Cowan Dictionary of Modern Written Arabic, nikah is defined as “marriage; marriage contract; matrimony, wedlock.”.

Nikkah/Nikah/marriage ceremonies are exchanges of vows between a Muslim male and female. The aim is to unite their lives. Muslim men could marry Christians and Jews without having to convert to Islam at any time under Islamic Shari’a.

A Muslim girl or woman, however, may not solemnize her Nikkah (Nikah) with a non-Muslim. Nikkah (Nikah) is both a sacred contract between male and female partners and a social announcement.

“Marriage is strongly recommended in the Qur’an and Sunnah because it “complet[es] half of someone’s deen (lifestyle).”

“He (Allah) made spouses for you from among yourselves, so that you may take blessings and love from them.” [Al-Qur’an: Surah 30, Verse 21]

Prophet Muhammad (PBUH) said: “Marriage is my way (Sunnah).” “Whoever rejects it will never be among us.” – [Sahih-Al-Bukhari].

You can reach us by email, WhatsApp, SMS, our online web form on our site, or via a telephone call if you have further questions about Nikah (Nikkah), Qazi (Nikah Khawan), or Nikah Registrar. Moreover, our offices in Karachi and Islamabad are open from 10 AM to 7 PM.

4 Simple Steps of Getting Married in Islam

In Islam, Nikah can be done in 4 simple ways, mentioned below:

A Muslim marriage begins with this step. A family elder will usually look for a marriage counselor or a friend to help their children find a suitable mate. Wedding proposals are sent to either the bride or the groom’s parents.

He can also ask his father or guardian for the hand of the woman he wishes to marry.

“Women are married for 4 reasons: their wealth, their family status, their beauty, and their love of religion. Blessed are those who marry her for respect.” – [Sahih-al-Bukhari & Sahih-al-Muslim]

The mixing of two non-Mahrams (Non-Mahrams) or dating can be forbidden before nikah (Nikkah). A Mahram (father/brother/guardian) is present when the bride and groom meet and speak before Nikah.

The proposal will be accepted after the man or woman who is to be married has consented. Progress is impossible without permission since it is a crucial first step. Before the marriage proceeding again, all conditions must be agreed on (e.g., immigrating after marriage).

The groom gives the bride a marriage gift called a Mahr, or dower. The gift could be money, jewelry, or another valuable, or it could be a simple act of kindness.

According to the cultures and people of the world, the meaning of Mahar varies. Payment for Mahr can be made fully in advance, partially in advance and partially deferred, or deferred but payable on demand. – [Sahih-ul-Bukhari]

The third part of the song is “Ijab”, which expresses the desire for marriage and acceptance of the Qubool (acceptance) offer.

In traditional weddings, the wali or vakil is usually the one to accept the bride’s proposal. In addition to the written document (Nikah Nama) signed by both the bride and groom, there are also two witnesses known to both parties.

An Imam or Nikah Khawan will address the people gathered at the wedding ceremony with the bride and groom about Muslim weddings and the Sunnah of the Prophet Muhammad (PBUH).

The wedding feast is known as “Walima or Valima” is held after the Nikah (Nikkah). Walima is primarily intended to inform the public that there is marriage between two people.

Marriages that take place in secret are discouraged, and they are only considered valid if both parties are informed. During the festival, friends, family, and loved ones are invited to celebrate with each other.

In addition, it is essential to invite the poor into the party with everyone else.

This ceremony should not be wasted, as the Prophet (PBUH) said: “The most blessed Nikah is the one that costs the least.” – [Al-Bayhaqi]

According to Hazrat Muhammad (PBUH): “The worst nourishment is a marriage ceremony (Walima) in which the rich people are invited and the poor are not.

Nikah Nama Urdu & English along with Nikah Khawan Services are offered in Karachi, Islamabad, and Rawalpindi for Online Nikah, Online Marriage/Shadi, and also for Nikah at home. Within 1 day, you can register for Nikah Nama.

Please let us know if you require English Nikah Nama because Nikah nama in English is hard to arrange. If you wish to have your nikah solemnized (with or without Wali), you can book a qualified Nikah Khawan/Qazi who will arrive at your location at the right time.

Similarly, in a Muslim marriage, there is an offer and a response. In court cases involving marriage, the Nikah Nama can be used to prove the contents of a Nikah. The Nikah Nama contains the facts and conditions of the Nikah between the parties and is meant to be drafted in a way that is easy to understand if a dispute arises.

There are columns in Nikah Nama for maintaining, delegating, and restricting talaq information. There is an additional column for special circumstances. During or before the ceremony, the Nikah Nama should contain the current terms of the Nikah contract.

Our Service Fee For The Nikah Khawan (Qazi) In Karachi, Islamabad & Rawalpindi

It is well known and understood that Pakistanis spend a lot of money on their marriage ceremonies and parties. Furthermore, they celebrate marriages as festivals and organize several cultural and customary functions.

Including all legal paperwork and registration, a Nikah through our Khawans (Qazis) will cost you just Rs. 10,000 to Rs. 15,000, depending upon the distance and other circumstances. We charge a nominal fee for Nikah Khawan (Qazi) in Karachi, Islamabad, Lahore and Rawalpindi, though this varies on city to city basis. No doubt, our services, and experience are of the highest standard, but our fee is the lowest in Pakistan.

Our Nikah Khawan (Qazi) can visit the venue of your Nikah/marriage ceremony. However, we also arrange the Majlis of Nikah (Gathering for Nikah) at our office, we charge a minimum fee for this services. Nikah with simplicity is a marriage that is solely between close friends and family members.

There are no extra costs associated with simple Nikahs, such as a marriage hall or banquet, lunch, dinner, decorations, expensive clothing, jewelry, or transportation. Simply come to our office.

For more information, you can contact us through email, WhatsApp, SMS, or through our online web form. We also offer you the opportunity to visit our offices in Karachi, Lahore and Islamabad.

In all Union Council offices, there are Nikah Registrars appointed by the Government. They are responsible for registering the Nikahs. Besides providing Nikah Khawan (Qazi) services in Karachi, Islamabad, and Rawalpindi, Right Law Associates also get  registers Nikah Namas (Official Documents of Nikah contract) by the officiant Nikah Registrars in Karachi, Islamabad, Lahore and Rawalpindi.

Q: Who is a Nikah Registrar?

Nikah Registrars are Government deputed persons in every Union Council who are  responsible for registration the Nikah solemnized within jurisdiction or that Union Council.

Q: Is it necessary to register Nikah in Pakistan?

Marriages performed in Pakistan, under Muslim law are required to be registered under Section 5 of the Muslim Family Law Ordinance. Nikah Registrars are appointed by each Union Council and licensed by the Union Council to conduct Muslim marriage registrations.

Q: How do I get Nikah Nama from Union Council?

Q: What if a Nikah is not registered?

The Muslim Family Laws Ordinance 1961 states that registration marriage is mandatory and that failure to do so may result in a fine and sentence by a court.

Q: Is an online Nikah valid?

Yes, as per the Hanafi School of Thought and relevant Pakistani Marriage Laws, online Nikah on WhatsApp, skype or on any other video call app is valid.

Q: How can I check my husband’s second and secret marriage in Pakistan?

You can check it by sending a message to 8009 with your husband’s 13 digit CNIC number and its date of issue, if you wish to check his second and secret marriage of your husband. As soon as you send this message, all information about the particular person will be sent to you, so you can check if an unrelated woman is listed in the list of family members.

Q: Can a Nikah be done without Wali?

A woman cannot enter into a Nikah without the permission of her Wali, according to Shafi’i, Maliki, and Hanbali Islamic schools of thought. On the other hand, the Hanafi (Sunni) ruling on the said matter holds that a woman can enter into a marriage contract on her own without the permission of her Wali. It is permitted as per Pakistani laws, as well.

Q: Do you have to say “Qubool Hai”, three times during your Muslim Nikah?

Pakistani Islamic marriages must be officiated by Nikah Khawans or Imams, the religious leaders of Islamic prayers. When the Nikah khawan/Imam asks for their acceptance of marriage, the couple to marry, they reply “Qubool Hai” (I accept) three times. 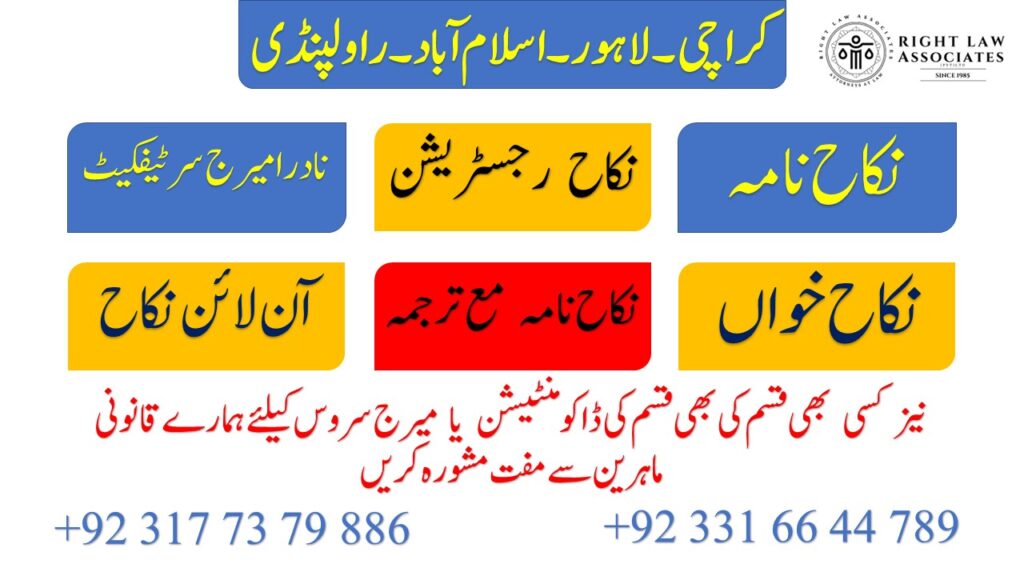 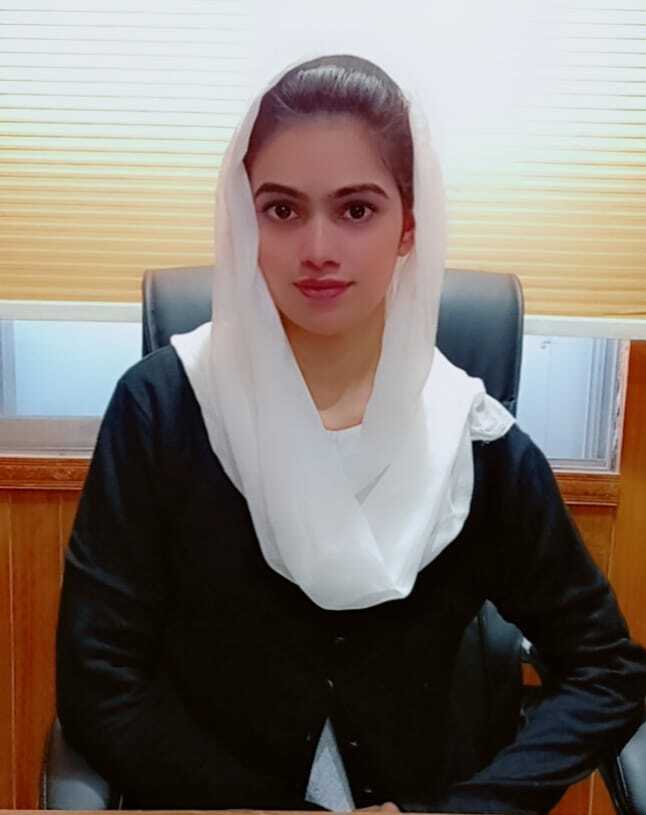